The Pinhawk Vertex Dual Length irons are the ultimate in modern day technology for game improvement. The golf industry has learned a lot in the last few years with regard to irons. Single length irons, whether it be our own extremely popular Pinhawk SL irons, Cobra’s, or other brands, have been proven to make the game easier. Bryson Dechambeau, love him or hate him, has shown the world that the single length concept is viable even at the highest level.

However, for many of us, we want our cake and we want to eat it, too. Introducing the Pinhawk Vertex Dual Length Irons! A vertex in math is defined as “a point where two lines meet”, and that is the perfect name to describe these irons. They combine the best of both worlds for the ultimate in consistency: Not completely single length, and not traditional length. Instead, just two different lengths: the 3, 4 and 5 irons one length, and the 6, 7, 8, 9, PW, AW, SW another. This configuration results in no distance loss in the long irons and the full benefits of single length irons in the “short” set (6-SW). 2 different lengths, and just 2 swing planes, vs many planes in a traditional set. 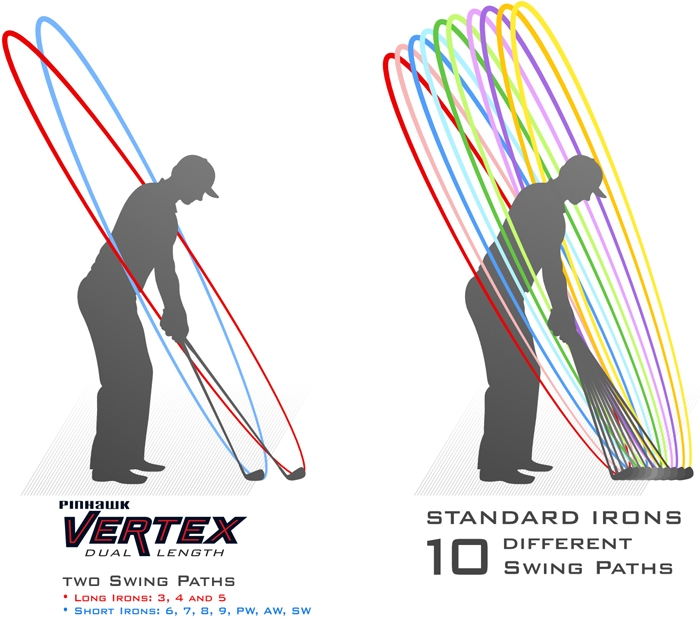 How long are the long irons and how short are the short irons?

I’m short (or I’m tall); can I get a different length?
Our standard length is generally the “sweet spot” for most players. If you are exceptionally tall or short however, standard length may not be for you. We are able to vary the lengths up to ½” either way easily. In exceptional cases, you can email us for recommendations for much longer or shorter sets and we will tell you if it’s possible. Look at our WTF (wrist-to-floor) chart below for general recommendations. For more details on how to measure your wrist-to-floor, look under “Club Length” of our fitting page.

Can I just order the “short set”?

Absolutely. As we mentioned above, the “short” set (6, 7, 8, 9, PW, AW, SW) is a no-brainer for almost any golfer that wants more consistency in his game. We honestly feel that you would love the entire set, but we realize that some players don’t use irons much beyond their 6 iron.

Why do the 3 iron and the 6 iron look slightly different than the rest of the set, and why do they cost more?

The 3 and 6 iron use a new iron technology. First, they have an ultra thin, high strength cup face to help increase ball speed and maximize distance. The weight saved by the thinner face is positioned to allow for an optimal launch angle. This is a hollow bodied design that provides unparalleled forgiveness and distance. Hence, it costs more.

Tell me again why the #3 and #6 were designed the way they were?

They are the irons in their respective length group that needed “extra” launch and distance to achieve proper gapping because they are the lowest lofted clubs in their length grouping. Remember, the lower the loft, the higher the difficulty to launch the ball correctly. The hollow bodied, thin face design of these 2 clubs make up the difference needed. Testing confirmed that the extra technology was needed in these 2 irons.

Has this ever been done before?

Sort of, but modern technology has made it more viable. Even as far back as the Bobby Jones era, club manufacturers knew that fewer lengths in a full set of clubs helped the golfer establish more consistent swings. Bobby Jones himself designed a set of Spalding clubs called Kro-Flite which featured some irons in the set at the same length.

Here’s a picture of the ad that Spalding used. Obviously in the 1930’s they were limited in what they could manufacture, but Spalding and Bobby Jones knew that the less “swings” in a set of irons, the better.

Another niche company, Simpletons, also produced a set of dual length irons, but didn’t have the technology in their set that the Pinhawk Vertex has, and didn’t have sufficient success with their marketing efforts to gain any traction. But was the idea sound? Yes!

Do they come in Left Handed?

No. We don’t have plans for left handed at the moment, but as with the Pinhawk SL irons, the popularity eventually necessitated it, so you never know.

What are the lofts?

Lofts, lies, weight of the heads, offset, bounce and hosel depth can be seen below:

What kind of steel are the heads made of?

Can’t I just buy some other iron heads and make a set like this?

No single length or dual length set of irons can be made from traditional iron heads. A traditional set of iron heads has a different weight for every head. If you were to try and build a set of single length or dual length with heads of varying weight, not only would your swing weights vary wildly, but the flex of each club would also be different throughout the entire set.

Can they be bent for lie?

Yes, they can be bent upright or flat a maximum of two degrees.

Are They USGA Legal?

Yes. They are listed as conforming irons on the USGA Informational Club Database, listed under Pinhawk, right after Ping.

This site uses Akismet to reduce spam. Learn how your comment data is processed.


Played Bushwood on Sunday and even as I though ‘The chuk can’t get any better for me it did. The deeper face, and the added loft was a sight to see. Playing parters remarked – ‘How the hell did you do that,

Well, holy cow Played Bushwood on Sunday and even as I though ‘The chuk can’t get any better for me it did. The deeper face, and the added loft was a sight to see. Playing parters remarked – ‘How the hell did you do that,
https://konaonlinesales.com/testimonials/well-holy-cow/

Keepers Jim, they’re already here, and they are beautiful.

Will definitely make the thirty mile trip to the only open golf course in our area tomorrow.

Jim, you built me a fine set of golf clubs.

They look good, feel good, have great feel, flight and trajectory. I like the ping with the mid-irons too.  Working some kinks out with wedge play.

Thank you for a job well done.

Jim, you built me a fine set of golf clubs. They look good, feel good, have great feel, flight and trajectory. I like the ping with the mid-irons too.  Working some kinks out with wedge play. I feel very confident playing the set. Thank you for a job well done. Sincerely John Elliot Lake
https://konaonlinesales.com/testimonials/john-elliot-lake/

Thank you very much Jim. It was a pleasure dealing with you and I will definitely be back

Thank you very much Jim. It was a pleasure dealing with you and I will definitely be back
https://konaonlinesales.com/testimonials/hammy-tgnr/

Hi Jim, as promised here is a summary of my first 2 days with the Krank driver. I used it 26 times and hit 17 fairways = 65%, my misses were minor and all playable. I was concerned with the lower loft and longer shaft that I might have trouble but my accuracy was comparable to my Rage. I would estimate an increase of 10-20 yds with a top out of 247. Conditions weren't the greatest, spongy fairways and wind. Next time out I'll change the head to draw bias to see if I can get more roll. Overall I really like it. Many thanks, Sal.
KONA GOLF SALES
5
2019-09-06T09:54:19-04:00

I would estimate an increase of 10-20 yds with a top out of 247. Conditions weren't the greatest, spongy fairways and wind. Overall I really like it. Many thanks, Sal.
https://konaonlinesales.com/testimonials/increase-of-10-20-yds/

Hi Jim
Thank you for having my 7wood built so promptly.
Speedy delivery, and free shipping on this order. Mulch appreciated.
The club itself feels great and appeals to my eye.
I think it’ll fill that gap in my game.
Thanks again
John

I've been gaming the NUNCHUK since Thanksgiving weekend and after a few rounds and a couple of set up adjustments I'm now hitting my driver more consistent then ever before.

I've been gaming the NUNCHUK since Thanksgiving weekend and after a few rounds and a couple of set up adjustments I'm now hitting my driver more consistent then ever before.
https://konaonlinesales.com/testimonials/scott-nunchuks-tgnr/
5
6
KONA GOLF SALES

Get hosted with Google

All Prices in Canadian Dollars ... WE HAVE STERLING IRONS Single length Iron Heads in stock and ready to ship.... Dismiss